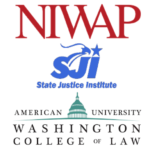 ILRC fact sheet was developed by the Immigrant Legal Resource Center.  SB 674: Immigrant Victims of Crime Equity Act SB 674 is a new California law that took effect on January 1, 2016. The goal of this law is to ensure that all immigrant crime victims in California have equal access to immigration status through the U visa.

This Immigrant Legal Resource Center produced practice advisory Guide to Obtaining U Visa (Certifications (August 10, 2017) outlines some suggestions and resources for immigration advocates working with law enforcement agencies to obtain law enforcement certification for U Visa applicants.  It also includes a summary of all state laws, as of July 2017, that have either passed or are pending regarding U Visa certification policies and protocols.

For technical assistance on the legal rights of immigrant crime victims, please contact us at (202)274-4457 or at info@niwap.org